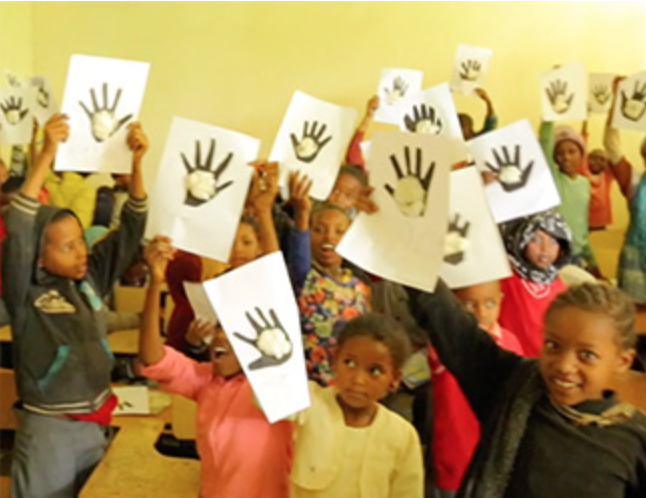 Every summer, churches all around the country hang up colorful signs letting the neighborhood know that Vacation Bible School is coming up. Publishers of religious curriculum crank out new creative themes every year to capture the attention of parents and grandparents seeking to fill-up the idle days of perpetually-bored kiddos. Church coordinators do their best to wrangle up enough volunteers, baked goods and popsicle sticks to fill up a four-day program filled with the right balance of activities and lessons. Some churches do it better than others. But everyone seems to be competing for the ultimate neighborhood VBS experience.

This past July (2018) a team of three staff from Adams Thermal Foundation (ATF) set out to discover what VBS would be like if offered in southern Ethiopia. In the town of Hosanna, in the middle of the rainy season, the first Vacation Bible School at Adams Thermal Academy was launched on a Monday morning for slightly more than 300 local children. Every day the attendance grew and by the end of the week, 650 children from kindergarten to high-school age were taking part in this inaugural event. For the ATF team from the US it became abundantly clear that VBS is kind-of-a-big-deal in Hosanna, Ethiopia.

While most church-going people understand what VBS is like here in the United States, our staff discovered many similarities and many differences while conducting VBS in Ethiopia. Here's just a few of the comparisons:

THEMES - In the US, we have themes that revolve around sports or outer-space or dinosaurs to keep the kids engaged. In Ethiopia, we didn't really have a theme except to convey the message that God created our world and that he loves each and every one of us. The classrooms were all packed full! Sometimes the communication was verbal, via translators. Often, we were building relationships with attention, smiles and hugs.

INVITATIONS - In the US, churches typically put an announcement on the screen or in the bulletin and then canvas the neighborhood with door-hangers. In Ethiopia, the word spread by word-of-mouth and every day more kids showed up than the day before. Even though there are plenty of churches in Hosanna, VBS is not an opportunity that happens very often.

VOLUNTEERS - This always seems to be a challenge wherever VBS is held. In Hosanna, we had 3 staff from the US, 5 volunteers from the capital of Addis Ababa and roughly 6-8 other Academy staff that helped out during the week. While this doesn't seem like the right ratio of adults for 650 kids, things never really got out of control. The children wanted to be there and patiently waited for whatever the next activity was.

CRAFTS - We didn't anticipate that so many younger children would have under-developed motor skills. So our volunteers and helpers did a lot of tracing and cutting for kids that couldn't get the scissors to work. We hauled a lot of craft supplies in our luggage. But we were also able to create some lessons using local raw bulk cotton, dried grass and home-made play dough. Evidently, we failed to communicate to the students that balls of cotton glued to an outline of their hand was actually a sheep. Most of the kids were still very proud of the hairy hands they created.

AGES - While VBS in the US is typically reserved for grade-school kids, we timed our VBS in Ethiopia to coincide with summer school at Adams Thermal Academy. So VBS attracted high school-aged kids as well as younger ones. In addition, children from all faith backgrounds were comfortable participating - Christian, Orthodox, Muslim and unchurched.

FOOD - VBS in the US usually involves lots of baked goodies and snacks. VBS in Ethiopia comes with a nutritious lunch. And for many, this may have been their only meal of the day. Nothing says "I love you" in a developing country quite like a full stomach.

MUSIC - You can't have VBS without fun songs and actions to go along with them, right? This is where Ethiopia VBS was quite different. There wasn't a lot of fun, kid-oriented music to select from in the Ethiopian language. So on the last day of VBS, we had a time of reverent worship with local worship songs and a presentation of the Gospel by local community leaders.

It's true, VBS in Ethiopia is different in many ways. But it's so much more than keeping kids occupied during summer vacation. In Hosanna, Ethiopia there's 600+ children who can't wait for someone to come and share the love of God with them next summer. Would you like to be involved in a VBS experience you'll never forget? We're looking for churches and individuals that would like to raise their own support and bring VBS to Hosanna in the summer of 2019.

Please contact Samuel Getachew at (605) 521-3155 or email sgetachew@adamsthermalfoundation.org to learn more about VBS in Ethiopia next summer.